Painting Trees on the Poudre

This local gem is a favorite natural area for all to enjoy – especially the beavers! 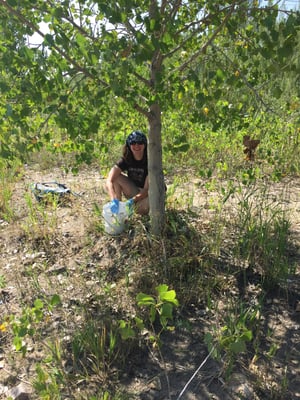 The cottonwood trees that line the river are a temptation too great for these little lumberjacks, resulting in a perennial trail of destruction along the banks. Some trees are over 50 years old, and because the river has become so channeled, new growth is limited. Preservation efforts, including cutting away banks to allow for better flood plains, and seed dispersal, as well as transplanting trees has helped address the age-gap. But the beavers aren’t helping the cause!

To address the issue, the staff at the City of Fort Collins Natural Areas organized an effort to paint the bottoms of the tree trunks with an ecologically friendly sand/paint mixture that the beavers dislike, and our BMCW crew joined the effort.  The paint mixture doesn’t harm the trees, the environment, or the beavers (they just don’t like the grit in their mouths).  It also encourages the beavers to turn to more non-native tree species in the area.

All told, the BMCW team along with other community volunteers and city staff painted about 100 trees!

Angela Tourney is director of finance and human resources at Blue Margin Inc.